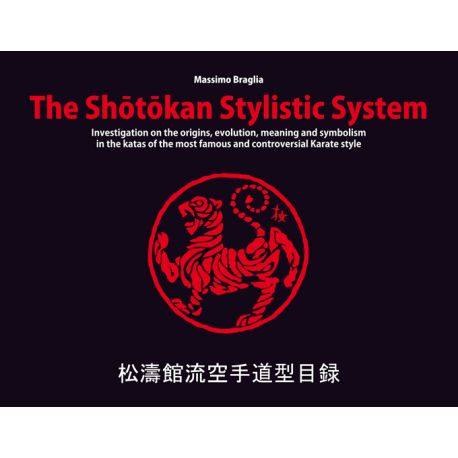 This book is an Investigation on the origins, evolution, meaning and symbolism in the katas of the most famous and controversial Karate style. new theories about the origins and historical developements of kata, the formal exercises of Karate, transmitted in the Shōtōkan school of Tōkyō by the Funakoshi family. "The Shōtōkan Stylistic System" contains the result of research, supported by the Grand Master Paolo Bolaffio, wich lasted almost two decades. It reveals the original names, key features and Chinese styles from which the kata of the Shōtōkan and Shōtōkai style orignate, but are also present in the Wadō-ryū, Shitō-ryū, Shōrin-ryū styles, and partly originate from the Gōju-ryū.

Always inside of the dōjō Shōtōkan, apart from the Karate kata, some Kobudō kata were studied, and coded and presented in this volume too. Once having found the original name and investigated the origins of many Karate kata citied, the author discovered from which Chinese boxing methods they originated, and then summarized the main features of the corresponding styles. To better understand the historical context in which these Chinese fighting styles transformed into the current Karate kata, a special historical-philosophical section has been added with a study on the symbolism of these styles and providing an extensive list of the kata version investigated. To build a solid bridge between the kata of Japanese Karate and the tàolù of Chinese Wǔshù from which they originate, the cited kata were connected with several very interesting historical, cultural and technical topics.

No customer reviews for the moment.

30 other products in the same category: