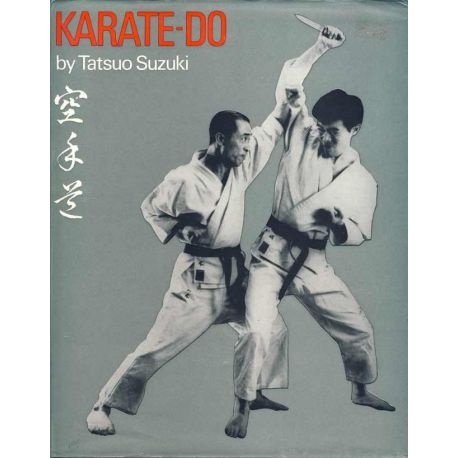 Libro KARATE-DO, by Tatsuo Suzuki, Inglese, 21 x 26 cm, 160 pag. Over 900 illustrations!
This book is unique on the subject of karate, in that the author, Tatsuo Suzuki - 8th Dan Karate, was the Chief Instructor of the Europe Wado-Ryu and Chairman to the United Kingdom Karate-Do Wado Kai, and a man recognised as the World's expert - explains fully the method of training for everyone, from the beginner to the highest grade of Black Belt, in an original way. This book has long been out of print and is now available again, as a softback edition, with all the original black and white photos and original content as was first printed in 1975/1985. Karate has rapidly developed to International Status and World Karate Championships are now held annually, such matches being based on the fundamental Japanese principles and rules. In this book, Tatsuo Suzuki provides for ordered contests as well as free fighting (Jiyu Kumite), in that he carefully describes actual combat, giving more than 900 illustrations and drawings. He teaches both the training method of Kumite for two persons and that for one student only, with some explanation of the spiritual nature of the exercise. The author also describes the use of several unarmed defence tactics against a knife attack or an attack by many assailants which he had developed through years of experience. Finally, because of the importance of Budo, a chapter is included which shows the correct approach and the right spirit necessary for a serious student of Karate. It has been claimed rightly that Karate improves the character, the spirit and physique. It teaches sincerity and self-control, and is today a physical art, a sport, and a method of self-defence.

No customer reviews for the moment.